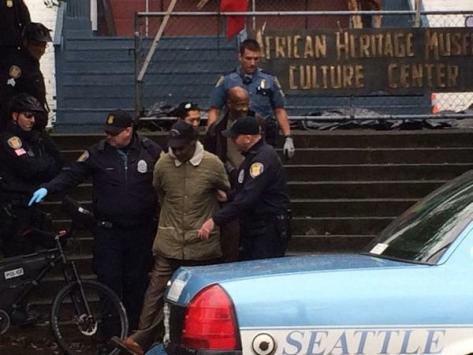 Armed with a battering ram and rifles, police took control of the Central District’s Horace Mann school building and arrested four squatters who claimed to be associated with the after-school tutoring group AfricaTown on Tuesday. Police said the raid, which ended a 14-week standoff with the Seattle School District, was prompted by threats of snipers and explosives in the building. When they searched the building though, they found neither.

A chain-link fence surrounded the 100-year-old school building, lined with African flags and hand-painted banners that read, “We stand with AfricaTown” and “Separate ≠ Equal.” Intermixed with the banners, construction signs detailed the Seattle School District’s plans for the building, which was originally set to be renovated this September and opened as an alternative school in fall 2014.

During the 2012-13 school year, AfricaTown, an after-school tutoring group, was legally using the building through the independent Seattle Amistad School, an immersion school that teaches in both Spanish and English. However, when the school district chose not to renew the lease with Seattle Amistad School this August, a small group of people continued to occupy the building, costing the school district approximately $1,000 per day in construction delays.

The AfricaTown Center for Education & Innovation is a coalition of community groups with a focus on African American culture. AfricaTown provides tutoring and classes to K-12 students in an attempt to close the achievement gap and encourage economic development among African American youth.

Teresa Wippel, a spokesperson for Seattle Public Schools, said the school district is working to find a new location for the original AfricaTown group. Wippel said the majority of that group left when the lease ended.

“The reason why we’re working with this AfricaTown group and working with them to find another place is because they are working with students and providing enrichment activities and helping us figure out ways to address that achievement gap that maybe we haven’t thought of,” Wippel said. “The people that were left in the building, that was not their purpose.”

When Charlie Mitchell moved to the Central District from Philadelphia over the summer, he needed a place to keep his stuff. Friends pointed him to the Horace Mann School, which had a reputation as a welcoming community center. Originally, Mitchell said, he supported the AfricaTown movement.

Still, he didn’t approve of how the situation escalated after the school district tried to close the Horace Mann building. “This is not a movement anymore,” he said.

Shawn Keenan, who lives across the street from Horace Mann, said that over the summer it was common to see people entering the building.

“We heard them all the time. It was cool, it really is,” Keenan said. “Then the fence went up. My feeling is they were making good use of the space and had something good going on, and they really wanted the space but, you know, rules and everything else came colliding.”

On Nov. 9, the school district voted to shut off power to the building. Those that remained began using a generator for heat.

Last week, police and media began hearing threats that the building was wired with explosives and that a sniper on the roof would retaliate if police tried to take action. On Nov. 10, KIRO 7 received a voicemail warning the news station that somebody on the roof had ‘an itchy trigger finger.’ SPD also heard of a rumor about explosives through intelligence work.

Ironically, as SPD Detective Renee Witt said, it was those threats finally drove Seattle police to take action. Until that point, neighbors said, the movement had always been peaceful.

Let me begin by setting a foundation. EVERYONE agrees that African-American students have been mis-educated by Seattle Public Schools and by public school districts across the nation. Black students have been presented with inadequate and inappropriate academic opportunities, they have been denied equitable access to programs and services, they have been disproportionately disciplined and disproportionately referred to Special Education. The outcomes have been academic under-performance, the “school to prison pipeline”, and the continued economic and political disenfranchisement of a significant portion of our nation’s people. It has been a tragic shame. It has been happening since the start and it is continuing. It is an ongoing emergency that urgently demands a response.

No one disputes this. Well, no informed and responsible person disputes it. This is not to say that other members of our community have not also suffered, but no one’s suffering negates anyone else’s. We are not here to negate or discount anyone else’s oppression or to determine relative suffering. That is a fruitless pursuit.

Following the occupation of the Horace Mann building the District formed a Task Force to discuss the various issues. At the meetings of this Task Force the District has acknowledged their failure, but they continue to refuse to directly and meaningfully address the problem. They have stonewalled the Africatown community. They have not indicated any willingness to change a single thing they are doing to improve outcomes for African-American students. Despite the fact that Seattle Public Schools has claimed that closing the academic achievement gap is their top priority for over a decade, the District has never made a plan to achieve that goal. And refuses to make such a plan now.

Here’s the funny thing. Everyone knows what needs to be done. It’s not a secret. It’s not a mystery. The solutions are well-documented. There are examples of success that can be duplicated here. There are the recommendations from the previous Task Forces and Advisory Committees that can still be implemented. The answers are known.

That’s where we are. It’s an abridged version, but all of the critical elements are there. Surely there is no one who is satisfied with this situation. Surely everyone is on the same side in this conflict. Get it? We’re not arguing among ourselves.

The tactic used by the Africatown community to lend urgency to the crisis has been the occupation of the Horace Mann building. Not everyone is happy with this tactic. Well, if you don’t like that tactic – and there is no need to tell us about how you don’t like it – then please, by all means, suggest something else that can be done to encourage the District leadership to promptly, directly, and meaningfully address the historic and continuing mis-education of African-American students. 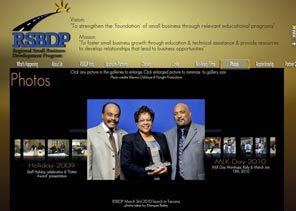 EXCLUSIVE: Silas Potter Jr. denies being the mastermind behind the Seattle Public Schools contracting scandal, which has triggered a criminal investigation.

TAMPA, Fla. — The man at the center of the Seattle Public Schools scandal — Silas W. Potter Jr. — says he’s not to blame and he’s being wrongly accused.

The culpability lies with others who dictated how he should spend the money in the district’s small-business contracting center, he told The Seattle Times in his only interview to date.

“I’ve been thrown under the bus,” Potter said in Tampa, Fla., where he’s lived in a modest apartment since October.
Potter managed the district’s small-business contracting program, where he oversaw the spending of $1.8 million in questionable contracts, according to a state audit and a district report.

The program, which grew to about a $1 million annual budget, was supposed to train small and minority-owned businesses in how to get district construction contracts.
But Potter approved contracts to favored businesses and consultants who charged the district inflated prices for work of little or no public value, according to the reports.

Potter denied being the mastermind behind the misappropriation of school-district funds, which has triggered a criminal investigation, the state audit and the firing of the superintendent.

“It’s a lot bigger than Silas Potter,” he said. “They’re trying to minimize their exposure of what they’ve done and maximize what Silas has done.”

Potter said the finger should be pointed at two people above him who demanded that he give school contracts, without bidding, to African-American businesses.

Potter said his supervisor at the time, Fred Stephens, facilities director, controlled and approved how the money was spent. And one of the school district’s attorneys, Ron English, reviewed the contracts and discussed business deals, Potter said.

Potter’s “allegations are not true,” English said in a statement Wednesday. “I had no involvement or knowledge of his contracts. I prepare the standard contract forms used by the district, but not the actual consulting contracts. I do not review invoices.”

Stephens disputed Potter’s claims in an e-mail Wednesday. “His newest claims are nothing more than another reckless attempt to deceive and shift blame,” wrote Stephens, now a top deputy to former Gov. Gary Locke at the U.S. Department of Commerce.