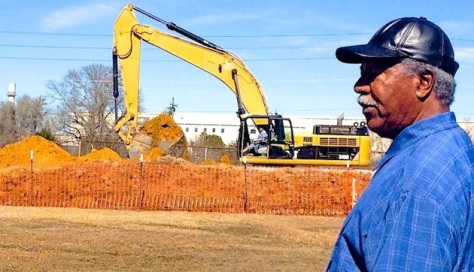 Enabler. That’s the current jargon for a very old idea. The serpent was an enabler. He didn’t force anything upon Eve. He just helped her decide to do what she wanted with the apple but shouldn’t.

Teachers’ tasks include showing students how to avoid the snares of enablers. But the head of Mobile’s public schools has become an enabler of adult misbehavior.

Superintendent Martha Peek came to the alumni quarters of Mobile County Training School on February 21 for a meeting about a crude oil pipeline. The odd name is a legacy of segregation, when the school system regarded black children as fit for vocational instruction, not academics. But the graduates have retained the name with some pride and have prominently attached the initials MCTS to the wall of their room, which also displays the long history of the school and the surrounding community.

The place was filled with alumni, neighborhood residents, and others wanting the superintendent to explain the clang of steel and chug of heavy machinery as she spoke. This racket came from sections of three-foot-diameter pipe going into a trench dug through the schoolyard.

For decades paper mills clattered and fumed and stank across the street from the school. When they closed in the 90′s activists envisioned a transformation of the area. Long before industry overtook this riverside bluff a few miles upstream from downtown, it was home to descendants of the last arriving American slave ship in the mid-19th century. Departure of the paper mills raised hopes of combining a revived residential zone with exhibits and attractions depicting the trans-Atlantic slave trade and the way its human cargoes fashioned new lives for themselves in an alien place. Africatown was the name for this vision.

Instead, other industries sprang up at the paper mill sites and began chewing into the edges of the residential tracts. Recently a tank farm on the south flank of the neighborhood expanded and a proposal came before the Mobile city planning commission for a new tank farm on the north flank so huge it ought to be called a tank city.

The pipeline snaking through the schoolyard connects these tank complexes with other pipelines to refineries elsewhere, and with the downtown terminal of the Canadian National Railroad bringing tars sands crude from Canada, and with oceangoing tankers moving crude to and from global markets. The emerging picture sketches plans by global energy interests to turn Mobile into a major handling hub for fossil fuels. And the school with a pipeline gash across its campus is at the center of the hub.