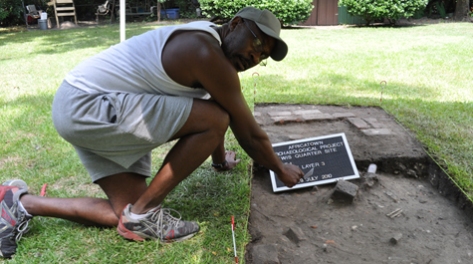 In the summer of 1928, Zora Neale Hurston conducted anthropological fieldwork near Mobile, Alabama at Africatown.

The field site had been a suggestion of her academic advisor, Franz Boas, who proposed that she collect West African folklore from Africatown’s most famous resident, Cudjo Lewis. Lewis, along with 109 other captive Africans, survived an Atlantic crossing aboard the Clotilda, the last documented slaver to make the Middle Passage.

While reflecting on his 68 years on American soil and five years of enslavement, Lewis provided accounts of great loss; he had buried his three sons and his wife and longed to return to his boyhood home in Ghana. Lewis also described moments of great happiness such as when Confederates fled Mobile in April of 1865 and he recounted that …”After dey free us, you understand me, we so glad, we make de drum and beat it… [like we were on] African soil.”

The United Nations used this account in March of 2009 to commemorate the victims of the trans-Atlantic slavery and to illustrate resonate moments of Africans claiming their freedom. Despite early research interest by Hurston and recent attention by the United Nations, few attempts have been made to pose connections between Africatown and the African continent, describe the difficulties of forging a community within the post-Civil War American South, or compare Africatown with other 19th/20th century African Diaspora sites.

Through fieldwork in January 2010 and again in the summer of 2010, members of the Africatown Archaeological Project worked to address these questions and aid the local descendant community in preserving cultural resources.