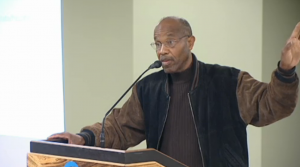 Omari Tahir-Garrett, the mayoral candidate accused of striking Seattle Mayor Paul Schell in the face with a bullhorn, will be allowed to leave the country to attend a conference on racism in South Africa.

In court yesterday, Garrett, 55, let out a whoop at the news.
“I’ve been fighting my whole life against racism and apartheid,” he said after the hearing.

“Since nobody else from this government feels concerned enough about racism to go to the conference, I’m going to go. How come the mayor isn’t going or the county executive? How can you solve the problem of racism unless you sit down and talk about the problem?”

Garrett initially was held for $250,000 bail, but that was reduced to $25,000 on July 23 after his attorney argued that Garrett had ties to the community and was unlikely to flee.