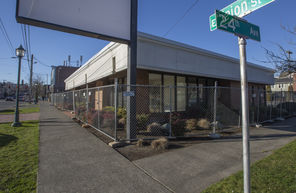 The nondescript brick structure opened in 1968 as the home of the first and only bank established to serve African Americans during a period of pervasive redlining, and its closing last spring marked the end of an era, of sorts.

Now the city of Seattle’s Landmark Preservations Board is considering a nomination to designate the building a historic landmark.

A hearing is scheduled for 3:30 p.m. Wednesday at the Seattle Municipal Tower, 700 Fifth Ave.

Omari Tahir-Garrett, a Central Area resident and community agitator, nominated the structure for landmark status, citing among other things what he called its distinction as the site of the Northwest region’s only African-American bank, called Liberty Bank.

His real goal, he acknowledges, is to suspend gentrification in the Central Area and slow developers, who historically have not flocked to the area in any significant numbers.

Liberty was founded by a group of individuals of different races, including Garrett’s father, an African-American engineer.

In 1988, regulators closed Liberty and reopened it with new capital as Emerald City Bank to continue to serve the community. That bank failed in 1993 and was acquired by KeyBank.